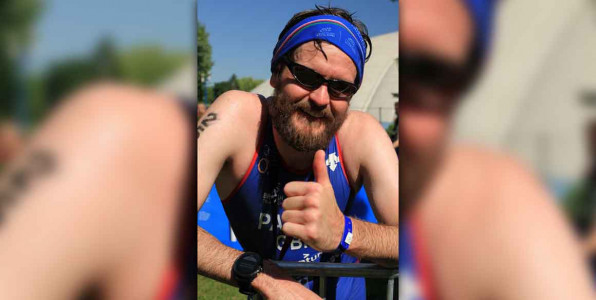 Essex based Sebastian who is currently 36 year old describes himself as amateur athlete as he works full time as a sound engineer at the BBC news and sport centre in London, but at the same time he feels like he trains like a pro up to six times a week, if not seven if I'm still itching to go!

I've been a runner primarily all my life. I've run for 21 years. I've been a member of three UK running clubs and compete at a county and national level for my current club Ilford AC. I love all distances and conditions from fell races to track running to race walking.

I've completed 53 marathons (highlights include: pb in Chicago 2018 at 3h 03 mins, I've run five of the six marathon majors, I've run marathons on four of the seven continents around the world.

I've done several 50km plus ultra-marathons and endurance races including running the length of Hadrian's wall in Cumbria and an adventure race in Scotland of 110 miles from east coast to west coast via bike, kayak and running.”

Triathlons and aquathons have also been Seb passion for the past 12 years.  In 2019 he represented Great Britain in the European (finished 5th) and World (finished 17th) Aquathlon age group Championships in Romania and Spain. Sebastian has also completed the long-distance triathlon called the Isklar Norseman, the world's toughest ironman and discovered its very cold in the fjord. I've finished a team relay ironman and an individual 70.3 middle distance event.

Through sport Sebastian has been able to help others. Sebastian is a UKA registered guide runner for the visually impaired and a volunteer Search and Rescue Technician for the charity, Lowland Rescue and is on call 24 hours a day to search for missing people in lowland wooded areas and water around London and the British Isle.

As brand ambassador, Sebastian has the full range of men’s tri-kit which he is using at present in his training sessions on a regular basis.  Check out the short Q&A with Sebastian on the Tenola website as he keeps himself motivated in the present world climate (COVID-19).

Fueling for a 70.3 event triathlete.com/nutrition/race…