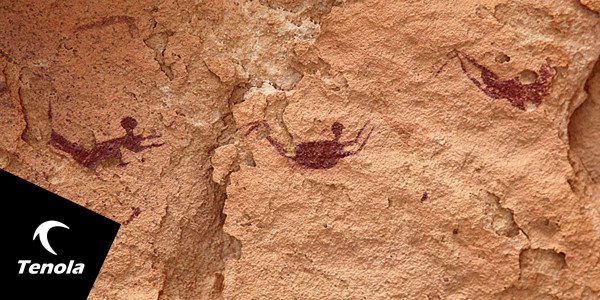 Today, swimming in the pool and the sea is common throughout the world in many sporting events including triathlon, but how and when did humans learn to swim.

Cave wall drawings of people seemingly swimming has been found going back 10,000 years. The painting in the Cave of Swimmers (near Wadi Sora in southwestern Egypt - above) appears to show people using a form of breast stroke or a doggy paddle stroke.

Further, a finding of an Egyptian clay seal dated between 9000 BC and 4000 BC depicts four people who are thought to be doing a form of front crawl. This isn’t to say that swimming originated in this area, but more likely it was happening elsewhere in the world at the same time. As, we now know, the Egyptian society were better at recording events. Evidence depicting swimmers has been found in other cultures such as the Minoans, Hittites in the Middle East, Inca culture in Central America and ancient India. During this period swimming was possibly used by stone age man to cross rivers and lakes looking for food. Did stone age man watch animals, ducks swim across rivers and lakes and copied (i.e., doggy paddle) their style at first before developing their variety of breaststroke? It’s easier to keep your head above water doing breaststroke than doing a doggy paddle.

The first written references to people swimming dates back to 2000 BC 1500 BC. References can be found in the Bible and the Greek poems, The Iliad and The Odyssey. The Greeks and Romans are known to have practiced swimming and held it in high regard. The ancient Greeks didn’t regard swimming as an Olympic discipline. Plato, the Ancient Greek philosopher once said “the inability of a person to swim, was a sign of a person who had lacked a proper education”.  Swimming was practiced by Romans, along with their history of bathing. It is not well known but Julius Caesar was regarded as an excellent swimmer. In Japan, swimming was often part of a Samurai Warrior training. With the Roman Empire collapsing in the 5th century, swimming became less popular in Europe.

The first books which focused on swimming were written in 1538 (Nicolas Wynman), more detailed books followed in 1587 in Latin (Everard Digby).

The first recorded swimming competitions were held in Japan in the period 36 BC. Japanese historical records have graphic descriptions of these first events. Modern swimming competitions started after the first indoor pools (London) were built in early 1800’s. The first swimming organization was formed in 1837. The first swimming championship took place in Australia 1846 over 440-yards. Captain Matthew Webb was the first to swim the English Channel in 1875.

Swimming was included in the first modern Olympic Games held in 1896, although women swimming events were only added in 1912.

If you are looking to get into competitive swimming take a look at our triathlon swimwear and if you need more advice then contact us >.

ABOUT THE AUTHOR: Ian Nolan

Tenola founder and CEO Ian Nolan has a lifelong love of all things active and has competed in a variety of sports over the years involving mud, sweat and tears – the latter following various serious sporting injuries! But it was the challenge of the dual or tri-disciplines of Triathlon, testing not only fitness but endurance and skill that truly captivated him and led to an ongoing passion for the sport.  Read More >

Fueling for a 70.3 event triathlete.com/nutrition/race…