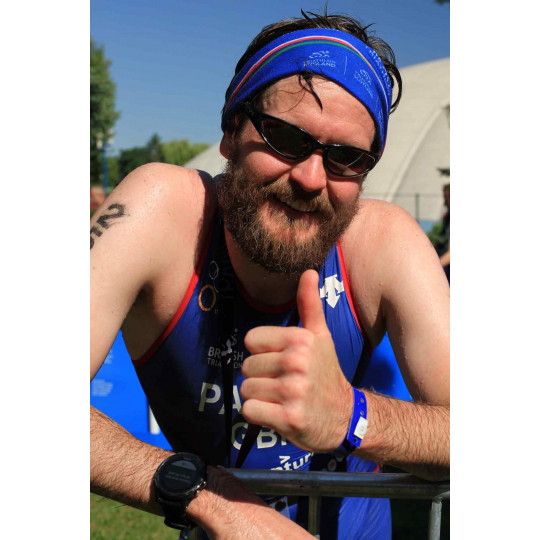 I've run for 21 years. I've been a member of three UK running clubs and compete at a county and national level for my current club Ilford ac. I love all distances and conditions from fell races to track running to race walking. I've completed 53 marathons (highlights include: pb in Chicago 2018 at 3h 03 mins, I've run five of the six marathon majors, I've run marathons on four of the seven continents around the world, I've raced numerous mountain marathons like Jungfrau and Snowdon and finally I've run the most northerly marathon in the arctic circle in Norway ). I've done several 50km plus ultra-marathons and endurance races including running the length of Hadrian's wall in Cumbria and an adventure race in Scotland of 110 miles from east coast to west coast via bike, kayak and running. Next year I'm planning to run the 500 mile Camino de Santiago pilgrimage in Spain. Triathlons and aquathons are also my passion for over 12 years. In 2019 I represented Great Britain in the European (finished 5th) and World (finished 17th) Aquathlon age group Championships in Romania and Spain. I’ve also completed a long-distance triathlon called the Isklar Norseman, the world's toughest ironman and very cold in the fjord! I've finished a team relay ironman and an individual 70.3 middle distance event.

Sport has also helped me to help others. I am a UKA registered guide runner for the visually impaired and a volunteer Search and Rescue Technician for the charity, Lowland Rescue. I am on call 24 hours a day to search for missing people in lowland wooded areas and water around London and the British Isle.

I was a bmx kid before 10 years old but always wanted my friend’s Raleigh Street Wolf as the sound effects unit got you all the attention. I rode his a lot! First proper decent bike came in secondary school and was a white Raleigh flyer racer. Hand me down from my sister!

How did you do in your first race?

My first triathlon was over at the beginner friendly Dorney lake for the 220 evening sprint series in 2009. I wore my new wetsuit for the first time and luckily bought glide cream at the event or it would have been a painful week after! I wore swim jammers and a running tshirt on the bike and run?!? After hitting a speed bump on the bike with jelly legs and almost stacking it I finished 101st out of 152.

What is your essential breakfast?

Some Chrissie Wellington advice has hit home for my breakfast routine. Two whole meal pitas with cashew butter and a banana. Followed by a pouch of baby rice with fruit puree! Kid at heart!

Train alone or with a group?

A runner by first passion so love to train with my athletics club, Ilford AC. A team can really push me I feel. Train solo for triathlons at present apart from virtual zwift friends!

Not a coffee fan (apologies not sophisticated enough!), so water and SIS electrolytes only on race days. Love a peppermint tea socially though!

Where does your bike live?

The shed, propped up by the garden tools and seed trays!

Energy bar all the way…love a bounce ball!

The craziest place you've slept since becoming a triathlete?

As a triathlete I do like a normal bed pre-race! Craziest place I’ve slept in my spare time is the last tea house before Everest basecamp in Gorakshep at 5164 meters. It was -15 degrees and the toilet water was frozen solid in the bowl!!!

Pee on the bike, stop or hold until the race?

Three people to have dinner with?

Alfred Hitchcock – bring him back as his life was so interesting and his horror directorial mind is unbelievable.

Tim Don – Positive, inspirational and has got some great personal triathlon stories.

What do you carry when you train?

I always overheat so end up carrying my gloves. Never leave home without my keys. I’ve learnt that lesson the hard way. People aren’t always going to stay in while you go for more exercise!

Got sunburnt and dehydrated so badly at the Edinburgh marathon (I know impossible right!?!) that I ended up drinking other’s discarded lucozade dregs from the curb side and the vest tan lines even lasted till the following summer race season!

Loved riding through Hardangervidda in Norway during the Norseman. I Live in Essex though so Epping forest is brilliant for training.

What theme song would you play for a movie of your life and why?

Hans Zimmer’s piece called ‘time’. Its bold, stirring, surging and dramatic yet has moments of peaceful calm. Hope my life is like that!

Need to always find a toilet! Got to wear a headband!

My acting mate Big Matt. He leaves me the greatest voicemails!

What are you reading?

I love my graphic novels. Cracking through the walking dead series at present.